Healthcare Organizations Are Taking Another Look at Telehealth Kiosks

Self-contained telehealth kiosks had a short-lived heyday about 10 years ago. Now they're getting a second chance, as healthcare organizations look at new ways to improve access and deliver care to remote populations.

The telehealth kiosk may be making a comeback.

Canada-based UniDoc Health Group unveiled its H3 Cube Virtual Care Solutions Model (VCSM) kiosk at the American Telemedicine Association conference this week in Boston, alongside news on a handful of projects around the world and proposed new uses.

The announcement raises the profile of a direct-to-consumer telehealth form factor that had enjoyed a heyday roughly a decade ago before sinking into obscurity. Now, with an emphasis on delivering care to populations in remote locations and helping people access care outside the hospital or doctor’s office, healthcare organizations are taking another look.

The H3 Cube is a self-contained room that can be dropped into a specified location to give people an on-demand and discrete virtual link to healthcare providers. It can include a chair and a bed and dozens of digital health devices, most of which are supplied by Boston-based AMD Global Telemedicine, and can be customized to meet a provider’s specifications.

“We can put these anywhere in the world,” company president and CEO Antonio Baldassarre said. “We are literally duplicating a clinic.”

Baldassarre said this kiosk first gained a foothold in Italy and Germany, where it was used to provide virtual care in remote Alpine communities. It’s now being deployed to Ghana and the Gambia in Africa, as well as in Ontario, where it’s being trialed in pharmacies and used to improve access to care for the Mohawk and Algonquin communities. 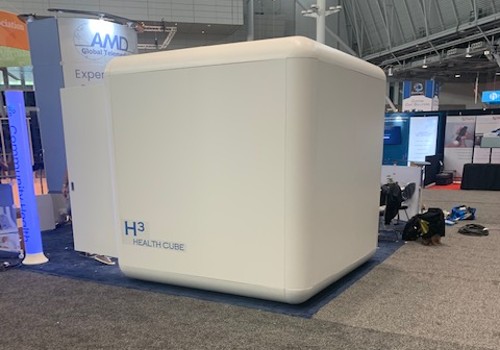 The H3 Cube, developed by the Canada-based UniDoc Health Group, was unveiled at the AMC Global Telemedicine booth during this week's American Telemedicine Association conference in Boston. Photo courtesy UniDoc.

Earlier this year the company signed a five-year, $6 million deal with Sirach Health and Wellness in Tucson, Arizona, to place at least 20 kiosks in locations around the city to serve low-income residents, veterans and the homeless. Other US deals are pending.

“Virtual care has come of age as the affordable and accessible alternative for providing front-line medical assessment for the underprivileged and underserved citizens of Arizona, America, and beyond,” Sirach COO Dr. Lynn P. Hall said in a press release. “This is a great opportunity to utilize technology effectively and compassionately.”

Baldassarre, who showed off the kiosk in the ATA exhibit hall and displayed a video of the H3 Cube being delivered to villagers in Ghana, said the kiosk allows healthcare providers to deliver care in hard-to-reach locations and to people who face barriers to accessing care. It can be placed in retail locations, community centers and other sites and equipped with as little or as much digital health technology as needed.

“We’re eliminating the burden of making an appointment” for a healthcare visit in a clinic or doctor’s office, he said.

The H3 Cube might remind more than a few people of the HealthSpot, the high-tech, high-gloss telehealth kiosk first unveiled at the CES show in Las Vegas in 2012. The company raised almost $50 million, built close to 200 kiosks and secured deals with the likes of Rite-Aid, the Mayo Clinic, the Cleveland Clinic and Kaiser Permanente before going bankrupt in 2016.

At that time, telehealth experts said the HealthSpot was too big and flashy, with a price point that made ROI impossible. Since then, kiosks have morphed into smaller units, like desktops or work-stations rather than rooms, capable of fitting into cubicles at libraries, clinics, malls, pharmacies, and even emergency departments at busy hospitals.

The form factor also took a hit during the pandemic. While the concept was a nice way of reducing in-person care and the risk of infection, healthcare providers had to spend lots of money and time cleaning and disinfecting the kiosks after every visit.

But the COVID-19 crisis has also helped. The pandemic forced many health systems to reimagine how care can be delivered outside the traditional hospital or office setting not only to boost access to care but to connect with populations who can’t or won’t go to care providers. They can also take advantage of better digital health technology and expanded wi-fi and cellular capabilities.

“They’re much more adaptable now,” Baldassarre said, noting the partnership with AMD Telemedicine gives them the opportunity to equip the cubes with more than 40 different tools capable of providing a wide range of primary and specialty care services. And through virtual care connections, he said, the cube can connect patients to payers, pharmacies and specialists at a moment’s notice.

In Arizona, he said, Sirach plans on deploying the kiosks to pull in homeless people, veterans and others who aren’t getting primary care services on a regular or reliable basis, and to use that platform as a bridge to more care services, even non-healthcare services that address the social determinants of health.

Baldassarre said he’s looking for partnerships with the Department of Veterans Affairs, as well as inner city clinics and Native American communities. And while the African deployments are subsidized by each country’s government, North American projects are hewing closer to a subscription-based model, with support from organizations like the VA, federal and state public health agencies and donations.

The success of these kiosks may very well hinge on how the company develops an ROI, which at this point isn’t clear. A press release issued this week further outlining the Sirach deal points out that more research is needed.

“The delivery of these initial VCSM kiosks and any additional kiosk locations are all subject to the commercialization of the VCSM kiosk by the Company, completion of successful site studies by both parties and other customary conditions,” the May 4 press release states. “As at the date of this news release, the VCSM remains under development by the Company and has not generated any revenues. There is no guarantee that any service fees will be paid to UniDoc under the Agreement or that the VCSM will generate any revenues at all.”

“We can put these anywhere in the world. We are literally duplicating a clinic.”

— Antonio Baldassarre, president and CEO of the UniDoc Health Group.

Self-contained telehealth kiosks enjoyed some popularity roughly 10 years ago with the Healthspot, but a lack of clear ROI and that company's eventual bankruptcy put an end to the trend.

Telehealth kiosks then evolved into smaller workstations and cubicles, and they've been placed in busy emergency departments, community health clinics, libraries, pharmacies and retail locations, offering on-demand access to a virtual health visit for popualtions who can't or won't go to a doctor's office or hospital.

Newer models like the H3 Cube aim to improve access to care in rural and remote communities by giving residents access to a self-contained healthcare visit and allowing healthcare providers to extend their reach and help underserved populations like the homeless, veterans, low-income and Native communities.