Violence in the emergency department not only poses a threat to employees, but it harms patient care, doctors say.

Assaults in the emergency department are on the rise with nearly one-fourth (24%) of emergency physicians reporting being assaulted multiple times a week, according to the findings of a new poll from the American College of Emergency Physicians (ACEP).

Indeed, 85% of emergency physicians believe the rate of violence in their department has increased over the past five years, primarily by patients and patients’ family members.

Their nursing colleagues will agree. More than 5,000 nurses were assaulted on the job in the second quarter of 2022 alone, according to shocking new data from Press Ganey.

Nurses and other frontline healthcare workers are much more likely to be victims of aggravated assault at work than workers in any other industry, says Kaiser Health News.

The most common types of assaults, according to the new poll, are:

Those most often responsible for assaults are psychiatric patients (42%) and those seeking drugs or under the influence of drugs or alcohol (40%), the poll says.

“I've been scared for my safety as well as the safety of my family,” he said. “I once had a patient's family member with a gun holster on his hip threaten to kill me and my entire family after I told his father that he needed to be admitted because he had coronavirus.”

Skog also told of overhearing an inpatient unit nurse who came to help the busy emergency department say to another nurse, “I'm telling my supervisor that I'm never coming down here to help out again. This is just not safe.” 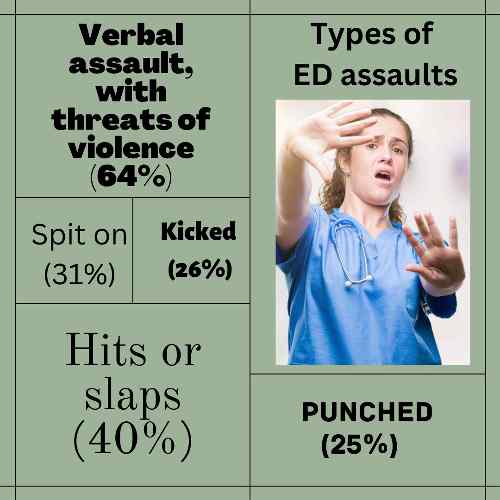 Much of the rise of violence in hospitals since 2018 has been caused by a lack of punishment, the poll indicates. Only 2% of hospital security pressed charges. The most common responses are escorting the patient out of the facility, restraining the patient, or no action at all.

“It depends on the hospital as well as the state where the hospital is located,” said Chris Kang, MD, FACEP, president-elect of ACEP. “Where I work, in Washington state, requires hospitals to have a prevention plan.”

Some hospitals simply don’t want to proceed with charges; other times, law enforcement does not follow up, Kang said.

Emergency physicians are counting on hospitals and legislative bodies to provide protection against violence, Skog said.

Some hospitals have taken steps to protect their employees and patients from violent outbursts, such as Maine Medical Center in Portland, Maine, which has increased security guards, locked down some doors, and installed metal detectors at main entrances and at the ambulance entrance.

And when an altercation—verbal or physical—begins at Inova hospitals, it is quickly met with a rapid-response team specially trained to de-escalate and safely contain the fracas.

ACEP and the Emergency Nurses Association launched the No Silence on ED Violence campaign in 2019 to raise awareness, advocate for policy changes on the state and federal level, and strengthen protections for frontline workers.

The emergency physicians’ group pointed to federal legislation that could bolster protections for healthcare workers.

The bipartisan Safety From Violence for Healthcare Employees (SAVE) Act, introduced to the U.S. House of Representatives in June, would criminalize assault and intimidation of healthcare workers.

“Emergency medicine is hemorrhaging nurses, technicians, and doctors that rightfully can no longer accept the ongoing violence that they experience daily,” Skog said.

“Now, more than ever, I fear that we will lose these frontline medical professionals unless action to increase accountability and add protection in the emergency department is addressed with the seriousness and urgency required to stem the tide of violence."

“Emergency medicine is hemorrhaging nurses, technicians, and doctors that rightfully can no longer accept the ongoing violence that they experience daily.”

Nurses and other frontline healthcare workers are much more likely to be victims of aggravated assault at work than workers in any other industry.

85% of emergency physicians believe the rate of violence in their department has increased over the past five years.