Everyday Answers and Solutions Based on Premature Conclusions

This article was originally published February 15, 2021 on PSQH by Benjamin E. Ruark

The configuration of day-to-day healthcare practice varies considerably, depending on the type and level of care administered. Anyone familiar enough with different types and levels of care can attest to the general informality with which medical answers and solutions get bandied around in the rhythmic press and exigency of ongoing daily activity, especially in settings peppered by periods of downtime. The glaring exception, of course, is those wards where clinical decision-making steadfastly rules, and where medical answers and solutions more directly reflect the serious nature and high stakes of nonstop care.

What looms as aberrantly apparent, to some at least, is how these two worlds of practice exist side by side, yet only one of them reliably produces answers to questions and valid solutions to medical problems. Still, the other world’s cavalier state of practice conveys hasty answers/solutions that are equally conveyed with 100% certainty, presumed to be actionable. This world is peopled by staff who are unaware they’re functioning more or less in “sleep mode.” In other words, they’re sleepwalking.

The world of the waking, so to speak, is precisely the opposite: characterized by its solemnity in generating, examining, and evaluating potential answers or solutions upon which an informed decision will rest. That decision offers the best chance for success, but only after first articulating how success has been defined. This world is populated by critical thinkers. Obviously, this is the world we should expect all healthcare professionals to inhabit.

Hasty or premature conclusions offered as answers to questions or as solutions to be administered are nothing more than hypotheses cloaked as a sure thing. Across many work contexts, these become unwitting fodder for dialogues of consequence between medical staff, or between a staff member and a patient. In a nutshell, such conclusions are too quick-off-the-tongue when they arguably need to be slow-off-the-mark. Why? Because they can have real consequences if acted upon, and those outcomes are just as likely to harm as they are to help. With this in mind, any time an answer or solution gets uttered so freely, the stakes in the dialogue change. No bells will ring, no alarms will sound—yet the potential for things to go sideways has just ratcheted up considerably.

Lineup of culprits: The usual suspects (influencers), but it’s none of them

Research literature suggests that degradation of nurse judgment and decisions can be traced to the usual lineup of suspects: Time crunch leads to added stress, which leads to fatigue, which leads to poor problem-solving and decision-making. Or, as Goldsby and colleagues (2020) summarize, “Decision-making by nurses is complicated by the stress, chaos, and challenging demands of the work.” Just to clarify: As used here, a judgment is making an evaluation to form an opinion. A decision is arriving at a determination to take a specific course of action, or to take no action at all.

In “Nursing: Inseparably Linked to Patient Safety,” the first chapter from the 2004 book Keeping Patients Safe: Transforming the Work Environment of Nurses, produced by a committee of the Institute of Medicine, we find the oft-repeated statistic of 44,000 to 98,000 hospitalized Americans dying annually as a result of medical errors. Bringing the problem closer to home, Nibbelink and Brewer (2018) cite an Institute of Medicine figure directly attributing 98,000 patient deaths, yearly, to poor decision-making. They also support my earlier claim that nurse decision-making varies by care setting (for example, intensive, emergency, and urgent care vs. primary and long-term care).

This book also mentions a 2002 survey that sampled the American public’s perception of our error-riddled healthcare system. Among its findings:

This reinstates my contention that quick-off-the-tongue answers and solutions—i.e., performances—are rashly and automatically reached, absent of reasoning and reflection. Hence, they are premature and partially accurate at best. In a critical care unit (CCI), for example, we’d assume judgments are formed prudently, regardless of time pressures. And yet Yang and colleagues report that CCI nurses make a judgment every 30 seconds. It’s hard to imagine a high rate of accuracy being sustainable in a work environment where the stresses of recurrent time constraints inflict mental fatigue and erode judgment accuracy.

In her dissertation, McClelland (2007) cites previous research arguing this point: “Fatigue and sleep loss associated with longer shifts often leads to a variety of negative outcomes such as … slower problem-solving, and decreased mental agility … as well as poor decision-making, degraded judgment, and degraded decision-making.” Regardless of shift length (eight vs. 12 hours), there never seems to be adequate time. A 2018 time-motion study of nurses reported results similar to previous studies of hospital environments as follows: 34% of time was spent in patients’ rooms, 21% to 41% was spent on documentation (charting and review), and 8% to 16% was spent on activities that could have been delegated to others—thus viewed as time ill spent (Yen et al., 2018).

The figures are comparable with those reported in similar research by Butler and her cadre of researchers (2018): Nurses spent about 33% of their time in patients’ rooms, 12% outside those rooms (ostensibly writing and reviewing notes), 12% at a nurses’ station (ostensibly charting), and roughly 24% on activities elsewhere within the facility.

These studies seem to agree that nurses spend very little of their shift time in direct contact with their patients. Judgments and decisions are thus surely made outside of patients’ rooms, though we don’t know to what degree. Borrowing a phrase from Ronda Hughes’ seminal chapter in the Patient Safety and Quality (2008) handbook, “the everydayness of errors” suggests that time, stress, and fatigue potentially contribute to mistakes. But the sleeper variable at work in many instances is what I call abject disrespect for the intrinsic severity of decision-making. By frequently making judgments and decisions across wide-ranging situations of varying gravity, those judgments and decisions are at risk of losing their “gravitational pull” over time: waning toward weightlessness and insubstantiality.

Extending this thought, the healthcare environment’s stressors likely exacerbate a tacit norm that it’s OK to bench critical thinking when it’s inconvenient to the moment, or when staff forget to be ever mindful. And with the ever-present effect of modeling—observing coworkers offering answers and solutions on the fly to others’ medical questions and complaints—staff are presented with a ubiquitous notion of “license to violate” that inadvertently snubs more deliberate versions of critical forethought.

The prevailing root cause is unawareness of the repercussions of premature conclusions. There is no norm, policy, or mandate to carefully choose one’s words at all times when discussing potentially actionable answers and solutions; to always preface when a discussion is expressly hypothetical versus when it’s potentially or explicitly actionable. As it currently stands, only select care units impose any form of imperative to be consciously alert to every impending judgment and decision. In care units without that imperative, there is no external mechanism to drive critical thought. 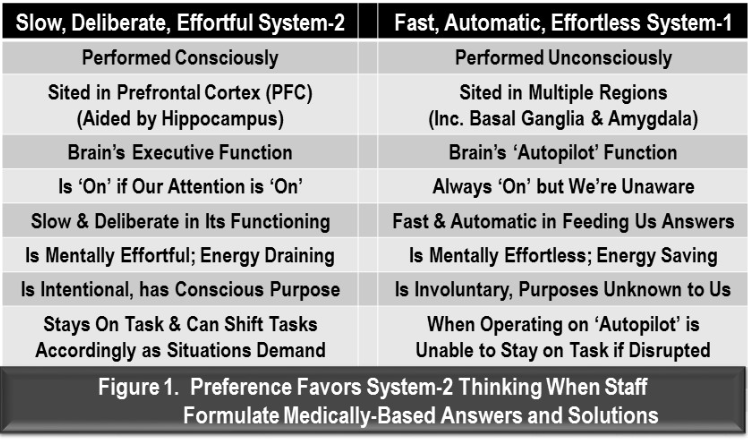 Supporting my claim that healthcare staff routinely formulate premature conclusions and offer them as answers or solutions are Daniel Kahneman’s System 1 and System 2 thinking concepts, which were introduced in his 2011 book, Thinking, Fast and Slow. In it, he doesn’t reference which brain sites are likely associated with each system, but emphasizes how divided the two systems are in their functioning and real-world consequences. See Figure 1 for a summary.

Kahneman’s System 1 refers to our unconscious mind supplying instant answers out of the blue—i.e., entering consciousness, or quick-off-the-tongue. By their nature, they’re ready-made, instant, or canned answers that aren’t thought through. This renders them vastly incomplete, partially correct at most, and significantly impractical for any intended recipient. Moreover, they have no reference point: They’re missing a patient’s history and other pertinent variables normally gathered through sober and extensive discussion. Such responses are only serviceable for casual conversation with no associated objective.

Paradoxically, questions are useful triggers for arousing slower System 2 thinking and its more deliberate, effortful answers. Yet, when staff are preoccupied for various reasons—such as stress, fatigue, daydreaming, boredom, or roused emotions—they are in an unreflective mental state. In this state, they are more prone to take the path of least resistance: When asked a question, they will rely on their dependably fast and automatic System 1 thinking to respond, and therefore supply whichever answer first pops into their head. This brings us back to the idea of sleepwalking. Brain imaging studies have shown that, during sleepwalking, the prefrontal cortex (PFC) (executive function) and hippocampus exhibit delta waves, indicating snoozing, while the limbic system (including the basal ganglia, mentioned in Figure 1), displays alpha waves, signifying wakeful activity (Berman, 2017). 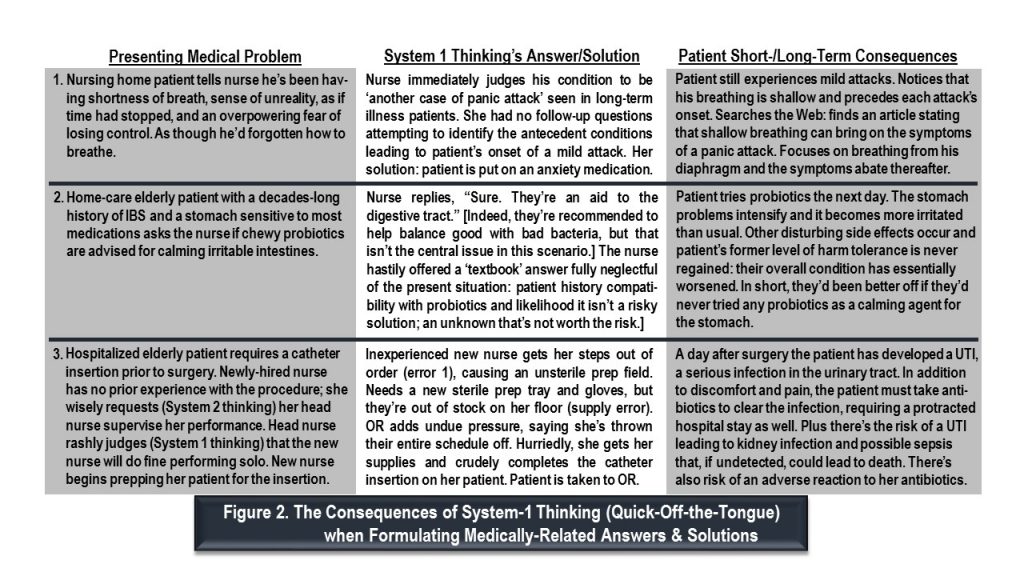 With the PFC shut down, the executive function of the prefrontal cortex (directly behind the forehead) is temporarily off duty. On hiatus, then, are focused attention, reasoning, motivation, and purposeful intention—all housed there. Meanwhile, System 1’s storehouse of readymade conclusions—aka its fount of textbook and canned answers—is open for business, as poignantly illustrated by three scenarios in Figure 2. In each of them, an answer or solution (seemingly helpful but actually rash) sets off circumstances that result in harm and suffering for patients, and possibly for others as well.

As stated in the subtitle, the prized objective of System 2 thinking needs to become standard practice across most care units, except perhaps emergency/urgent care. If need be, staff could apply mental ploys to ensure the fidelity of their System 2 thinking when proffering cure-based answers to questions and suggesting medical interventions to patients and other staff.

For starters, all care units would adopt the following prohibitions:

They would also adopt these unwavering principles:

All of the above can point nurses and other medical staff in the direction of habitual critical thinking. However, the bulleted principles would become unnecessary if medical staff were to convert to ubiquitous critical thinking. Toward this purpose, readers are therefore referred to Winningham’s Critical Thinking Cases in Nursing (Harding et al., 2013). Once its five prescribed steps become a matter of personal routine—second nature—the probability of forming premature conclusions drops to zero. 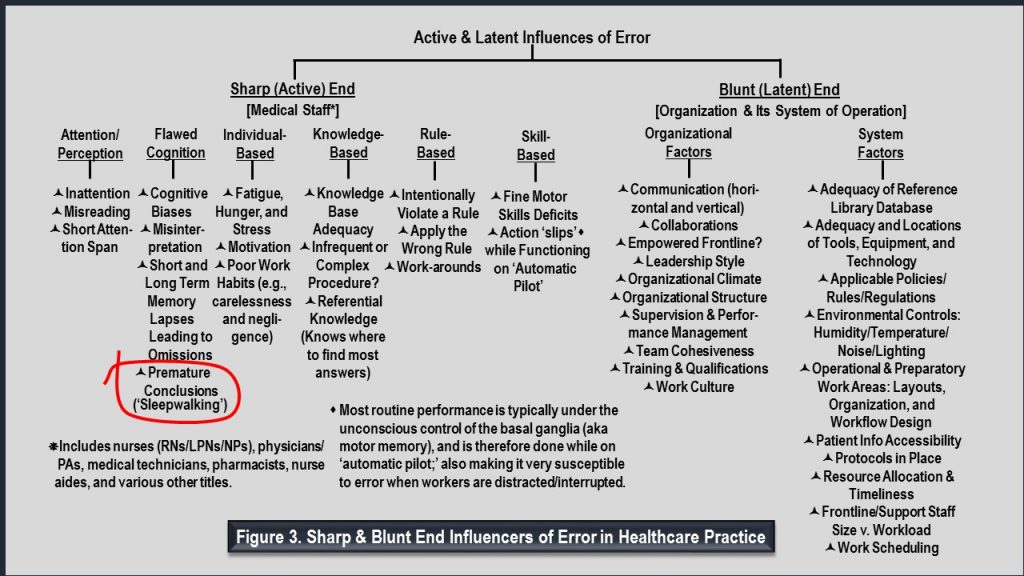 Figure 3 illustrates my recent addition (circled) to the so-called active sharp end of possible influencers of error in healthcare practice. Sharp refers to influencers of error directly attributable to various medical staff, divided into six categories. The circled recent addition, premature conclusions that routinely get proffered as viable answers/solutions, is clearly a subordinate to the category Flawed Cognition. Also, listed on the latent blunt end of influencers are the many organizational and system factors that, when inadequately designed and/or executed, indirectly set up adverse conditions and a greater likelihood for error.

I hope healthcare will soon hold an industrywide conversation in which medical staff decide to habituate en masse to slow-off-the-mark, System 2 forethought and its signature routine of thinking critically. I hope that they choose this as their new norm, their new standard of practice, and that they shun the quick-off-the-tongue answers and solutions we now know pose far too many unacceptable risks.

Benjamin E. Ruark is a former learning and development and continuous quality improvement professional. He now devotes his time to writing on important subjects for various industries, healthcare included.

Patient Safety & Quality Healthcare’s mission is to provide news, science, research, and a forum for opinion for clinicians, healthcare professionals, and everyone interested in improving quality in healthcare. Learn more.

A Virginia man suffered a rare reaction to a COVID-19 vaccine that caused a painful rash to spread across his entire body and skin to peel off, doctors said. Richard Terrell, 74, of Goochland began...

The leader of the Louisville-based insurer discusses how healthcare will develop in the coming years. ...