During the ANCC site visit, appraisers noted the teamwork that MMC nurses displayed in tackling complex problems; praised the hospital’s improvement processes and clinical nurse advancement program; and commended the nurses’ significant number of authored or co-authored peer-reviewed publications and national and international podium presentations, according to MMC.

In fact, for that benchmark, MMC couldn’t have done any better. “We were zero errors for that time period,” he says.

In the timeout, the entire surgical team verifies the patient’s identity, the procedure, and the surgical site.

“We follow a consistent procedure,” Carr says. “We make sure that we have the consent for the patient and that consent specifies specifically what we're doing and where we're doing. We do all the required things like marking the site, so if we're going to operate on your right knee, we would mark your right knee in advance.”

“It’s the basic things that have been recommended for a while,” Carr says. “It’s just a matter of working to hardwire those practices to make sure that we're doing them in a highly reliable way.”

“It’s something that we ingrained into the team as an expectation and we worked across all provider levels so that anesthesia, surgeons, and all of the staff in the room know that this is an expectation and that they engage in that practice,” he says.

“We have learned from mistakes over time,” Carr says, “so that has helped to hardwire that as well.”

“We, like everybody else, have experienced a significant increase in workplace violence,” Carr says, “and that's despite legislation calling for charges to be brought against people who assault healthcare workers.”

The hospital’s security assessment, which looked at risk relative to access points, resulted in locking down some doors and installing metal detectors at main entrances and at the ambulance entrance. “It's surprising how many weapons we've been able to detect,” Carr says.

The hospital’s workplace violence coordinator conducts education and training, and, when a violent incident occurs, follows up with the affected staff members to debrief and support them, Carr says.

“We also have a pretty robust peer support program, where we connect people who have experienced workplace violence with someone who can counsel them and follow up with peer support,” he says.

Additionally, MMC has advanced practice psychiatric nurses who help in handling difficult patients, he says. “They help in rounding, and they help us develop management plans for how we're going to address and deal with behavior.” 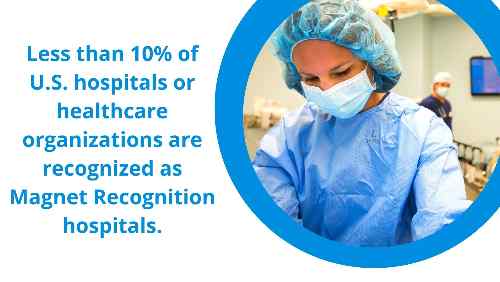 “We have an innovation center here and we have the ability to give people some initial startup funding to support innovative ideas,” Carr says.

Two in particular were included in MMC’s Magnet documentation, including a safety bra developed by an emergency department nurse.

When a patient is determined to be at elevated risk for suicide, they are required to change out of their clothing—underclothes included—and into paper scrubs so there is nothing that could be used as a ligature or to do self-harm, Carr says.

“It’s a bra that is Velcro® and is breakaway in such a way that you couldn't really use it to harm yourself, but it does provide some foundational support that would be missing,” he says.

The other innovation is a patient gown invented specifically for patients with neurologic injury, or patients that clinicians want to be able to get up and move.

Standard hospital gowns are open in the back, “so you’re exposed and there’s not a lot of privacy,” Carr says.

A nurse at MMC invented a romper-style patient gown that provides privacy, yet, with easy snaps along the side and inseam, allows quick access to medical tubes by the care team. The design also decreases fall risk and discourages patients from tampering with their medical lines.

The Magnet Recognition Program is considered the gold standard for nursing quality, and for MMC nurses to have earned the achievement through the extraordinary difficulties caused by the COVID-19 pandemic “shows our nursing team is clearly one of the very best in the country,” Carr says.

“To have been able to sustain this during COVID has been an even bigger challenge,” Carr says, “so we are super proud of our team here for good reason.”

“To have been able to sustain [Magnet recognition] during COVID has been an even bigger challenge, so we are super proud of our team here for good reason.”

Less than 10% of U.S. hospitals or healthcare organizations are recognized as Magnet Recognition hospitals.

MMC has an innovation center that provides employees with startup funding to support innovative ideas.

Endgame: How the visionary hospice movement became a for-profit hustle

Half of all Americans now die in hospice care. Easy money and a lack of regulation transformed a crusade to provide death with dignity into an industry rife with fraud and exploitation.