The program's peer support model helps healthcare workers recognize and respond to stress in their colleagues and themselves.

A stress-recovery method developed by the U.S. military for battle-scarred soldiers is now serving another frontline population who also is battle-weary from a different, but also traumatizing, war—the fight against COVID-19.

Stress First Aid (SFA) teaches individuals, either peer-to-peer or through leadership, how to identify stress in other individuals, in groups or teams, or even at the organizational level, says Maria Lariccia Brennan, chief nursing officer (CNO) of Penn State Health St. Joseph Medical Center.

"Once you identify the level of stress, then it suggests actions that can be taken to deal with that level of stress and what strategies you might possibly use," says Brennan, who in her previous position as a healthcare consultant to the New Jersey Nursing Initiative (NJNI), helped implement a statewide Nurse Stress First Aid program.

SFA's Stress Continuum Model was first developed by the U.S. military for Navy and Marine Corps service members, according to the National Center for PTSD, to assess the level of their own and others' stress responses. It has since been adapted for use by first responders and healthcare workers.

The model illustrates how stress reactions occur on a continuum. Early recognition of stress indicators allows nurses and nurse leaders to respond appropriately to de-escalate the stress reaction before they have the need for more formal intervention, the national center explains.

'We needed to do something'

Brennan, who previously was a healthcare consultant to NJNI until she took the CNO position at St. Joseph's in late June 2021, began to help implement SFA in New Jersey hospitals last year in the midst of COVID-19.

"Every nurse was affected. Most caregivers were affected. And so we felt strongly that we needed to do something," she says.

The Organization of Nurse Leaders, New Jersey, in which Brennan continues to be an active member, worked with NJNI, a Robert Wood Johnson Foundation program, to obtain the grant money to implement a nurse SFA program statewide.

"What's nice about this program is it's very user-friendly for the staff as well as leadership and what I also like about the program is we're all speaking one language," she says.

It's easy for a nurse leader to step onto a floor, assess the tension level, and ask nurses what kind of day they're having, she says.

"They could say, 'Oh, I think we're in orange today,' and when somebody tells me that, then I know I need a deeper conversation and I need to do something to get that orange down to yellow," Brenner says. "So, it's a very quick way to determine the stress level either in individuals or groups."

Nearly half of New Jersey's hospitals have adopted the program, Brennan says.

"Of course, we'd like to see every hospital adopt it, but of course it's the hospital's decision whether they want to do this now, or if it's the right time for them," she says. 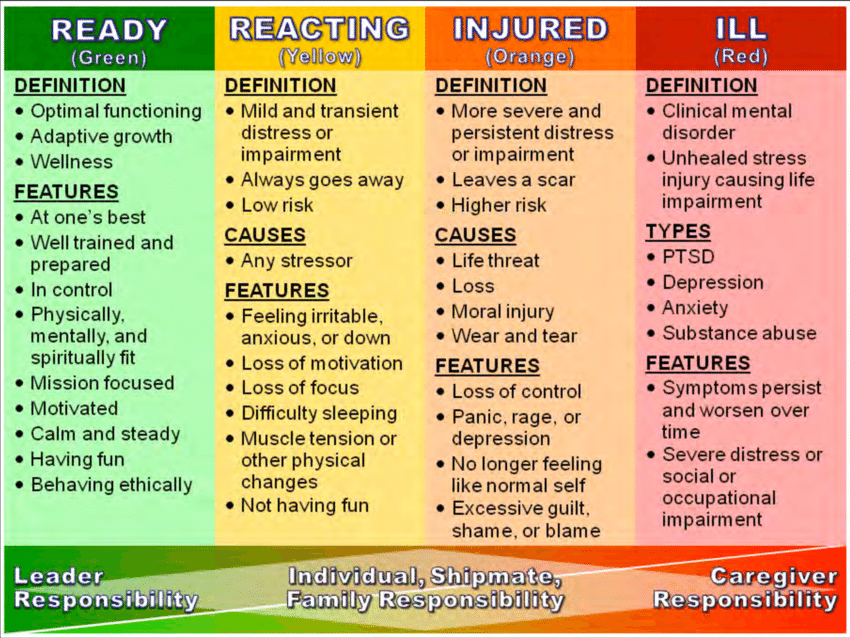 On a scale from green to red

SFA uses the colors green, yellow, orange, and red, as a general framework for identifying stress levels in individuals.

Green means everything is proceeding smoothly, and the individual is in control, with optimal functioning. As stress builds, an individual may experience mild distress and feel irritable (yellow), severe and persistent distress (orange), and finally, stress causing life impairment (red).

"On a really good day, you would be in the green color code with minimal stress that you can deal with," Brennan says. "You just deal with it and it's the normal everyday stress that everybody has every day."

"But then, when you get into what we call the orange level, some type of intervention is needed. Say I'm a staff nurse in the ICU and I see one of my peers acting differently, maybe getting hyper with dealing with a family member or even dealing with another peer," she says. "They may raise their voice and answer a question in a snappy way. You can just see that they're having a difficult day, and that would be orange level."

With SFA as a guide, Brennan would approach that staff nurse and ask such questions as, "What's going on? Can I help you? Do you need anything?" to encourage them to talk and destress, she says. She might also encourage the nurse to take a half hour off the floor or go relax in a designated destress room, which many hospitals have created because of pandemic stress.

"With SFA, you generally don't need any intervention beyond what either a staff member or leadership can handle," she says. "Sometimes, however, a peer may be identified at the red level, which is beyond the scope of a peer or leadership interaction, where we may need to refer the staff member to EAP, [the hospital's] employee assistance program."

SFA also is intended to help nurses recognize where their own stress level lies within the color coding for the purpose of self-care, but that's usually easier said than done, Brennan says.

"Most of us, truthfully, are not good at that as nurses," she says. "We tend to ignore our own personal stress because we're so focused in on taking care of our patients or we're worried about our families that we're the last ones to deal with our own issues."

But self-care is imperative for quality nursing, Brennan says.

"You have to care for yourself," she says, "so you'll be in good condition to care for others."

Stress first aid for anyone, anywhere

Brennan has been at St. Joseph only since June 21, but she's already proposed implementing SFA there and gotten leadership support, she says.

The advantage of SFA is that it can be implemented in any healthcare environment—from large health systems to local first responder stations—and can include healthcare workers such as school nurses and home health nurses, Brennan says.

"It doesn't have to be just for the acute care environment," Brennan says. "The program is really the same, regardless of the healthcare environment that you're in."

“What's nice about this program is it's very user-friendly for the staff as well as leadership and what I also like about the program is we're all speaking one language.”

Stress First Aid (SFA) teaches individuals how to identify stress in others or themselves.

SFA can be implemented in any healthcare environment and has been useful for nurses and other caregivers during the COVID-19 pandemic.

A new poll suggests a significant share of unvaccinated Americans may be resistant to COVID-19 vaccine mandates put in place by their employer.  ...